Preorder your very own copy of my friends, Char and Louis' book, today!  All pre-order customers will save over $5.00 on the book plus will receive a special limited edition signed and numbered copyof the book as soon as it is released!  Mention that I sent you over there!  :)  and don't forget to vote for me as the contest winner!  :D 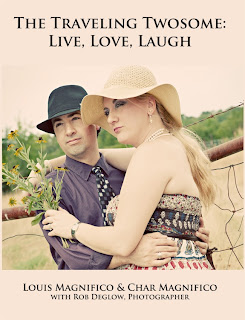 Labels: contests, give away

What would you have done?

I went to help "a friend" and her daughter for her wedding up in SC. (I've only known this person for 3 years.) I drove 1000 miles. I was told I could stay there at their home, otherwise I wouldn't have been able to go.

I bought and cooked all the food for me and my 2 children and also for her and her two daughters.


I went up to help do the food and decorate for the wedding. I got there on Sunday night. Her sister was arriving on Wednesday.


Monday, we went to Sam's and Costco and compared prices on items we were planning to use on the menu. The menu consisted of a fall theme, and I had spent many hours looking at recipes, etc. I tried to figure out how much we would need for 250 people. They were limited on funds, so I kept price in mind as well.


Tuesday, consisted of working on the wedding dress and other wedding stuff.


Wednesday, my "friend" went to work in the morning and then met up with her sister, who flew in from FL. Her sister's gift to the daughter was to purchase the food. We were going to all meet at Sams.


The sister is NOT a christian. She's the kind of person that needs the focus all on her. So as we are in Sam's she is drawing lots of attention to herself. My children, 14 & 15, stayed with me and behaved. I'm trying to figure out everything we need along with my "friend".


As we continue to shop, the sister was being nasty to my children and then her oldest daughter (the bride) started it too. The bride was rude and nasty to me as well.


I said to my "friend" that I was going to keep my children with me, because I didn't like what was going on. (My children both have voices and might say something and I didn't want to cause any issues, knowing everyone was getting stressed)


My "friend" obviously misunderstood and became offended. We went to the checkout and she realized there was too much money spent. She said she was going to "regroup".


I was left in the front with the carts, the bride, the sister, my children, and her anxiety filled (that's what she calls her) 11 year old.


Her sister said something about that's why I should have paid to cater the wedding. (Uh 250+ people and she was giving like $400-yeah, right?!)


Then the bride starts complaining to me. "We were here for 4 hours the other day, how come we didn't have this all figured out. Why didn't you plan this out better?"


We didn't have it figured out because the bride has continually waited til the last minute to let us know how much we could spend, as she waited for the last minute to do anything, even though her mother told her for a year to have it all planned by Sept 1st.


I became very upset (not to mention I was hormonial and on my monthly cycle) and went and told my friend, I'm going to get my kids something to eat. Let me know what you decide as a menu and I'll make it and then I'm leaving. (I knew her sister and I wouldn't be able to stay in the same room together)


I know it took her off guard, but then her daughter, the bride, starts screaming at me in Sams. Everyone in the store (so it seemed) was staring. She was screaming,Don't do this to my mother, don't stress her out....etc, and was very rude to me. I told her, "I didn't stress your mom out, you did, from your lack of planning."


I walked out to my van with my kids. Security was telling us (I couldn't even tell you what the guy looked like, because I was walking away) we would need to leave the store etc, if it continued....sigh~


When I got to my van, my "friend" called and chewed me out. She said, "You knew my sister wasn't a Christian, you knew bride was stressed, you knew my dd has anxiety issues!"


She chewed me out and blamed me for everything. I apologized, but she continued. Fianlly she said, "Go get your kids some food, and I'll call you later."


She called later and asked if I was at her house. "No, I'm going there now."


When I got there, her sister and the bride were there. I apologized to both of them and asked for their forgiveness. They both just looked at me dumbfounded and ignored me.


I put my purse in the room we were staying in, went to the kitchen got some food, and my "friend" walked in. She said, "We need to talk!"


I went into the room we were staying in, told my kids to pack up, we were leaving. "We're not staying where we're not welcomed."


As we were packing, "my friend" helped gather our stuff and handed it to us!


When we were done, I privately reminded my kids to thank "my friend" for her hospitality. I also thanked her and apologized again. I also said, I would stay and help, if she'd say something. She didn't reply at all....she just looked at me. I walked towards the door and she followed me, locking the door and turning out the light behind me!


I still can't believe it. If my kid had ever been disrespectful to one of my friends that came to help....oy!


Now what would you have done???