Whatever happens in Vegas...


DH took me to Vegas for a surprise 25th anniversary trip!  LOL  He was afraid I would be disappointed, but actually I thought it sounded kinda fun.


After shopping for two day to get ready to go and getting a manicure and pedicure, I was ready.  DH let me know on Thursday morning where we were headed, so I could buy the proper attire.


I ended up staying up all night Friday, packing and we had to leave around 3am to catch our flight out of Houston Intercontinental.  We got to Vegas by 9am their time.  Most of the day we were half asleep.  We couldn't check into our room until 3pm and so we went to Walmart to pick up a few things, and I ended up falling asleep in the rental car for over an hour!  LOL


Vegas....hmmm...what can I say....too little clothes, too many tattooes, lots of smoke, and gambling.  There, that's it in a nut shell.  LOL


But here's what we did:
Our first site seeing stop was here:
It doesn't look anything like on TV.  The actually Pawn Shop is rather small.  There were people lined up to go in.  No, the Pawn Stars weren't there or if they were, they weren't visible.  DH and I figure the way they do the show is, they prescreen who they want on, and they remove all the spectators, leaving just a few folks in there to make the store look much bigger. 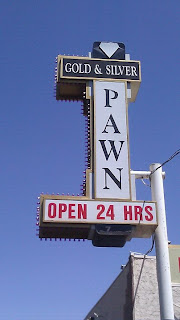 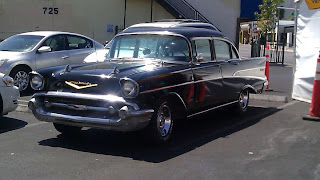 We stayed in the Stratosphere Hotel.  Saturday night we had $10.99 Prime rib, then went back to our room and went to bed.  We were totally drained from being up all the night before.
Here's a view from our window: 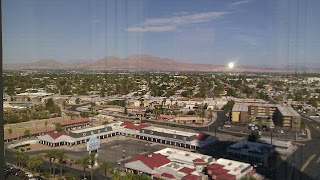 Sunday, we headed down to Lake Mead and Hoover Dam.  When we got down there, we decided to take a paddleboat cruise around the lake for 90 minutes.  Our cruise didn't start for awhile, so we drove around the park and stopped at the Marina.  There was a little girl feeding the fish popcorn and here's a picture of the fish all gathered together to enjoy their snack.  Most of them are carp, but there are a few striped bass in there as well: 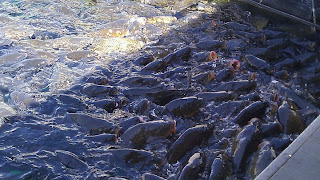 The cruise was very relaxing and beautiful.  We got to see the back of Hoover Dam as well as the new bridge they built across the Colorado River. 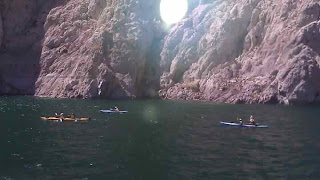 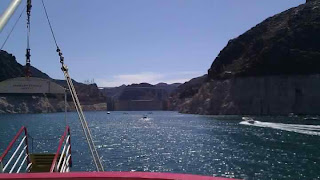 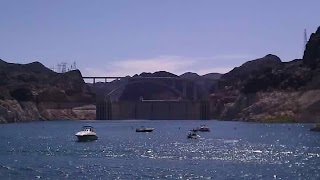 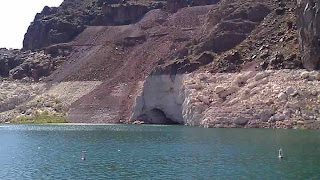 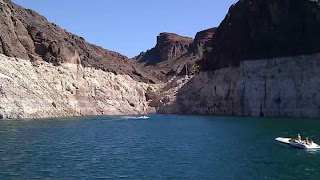 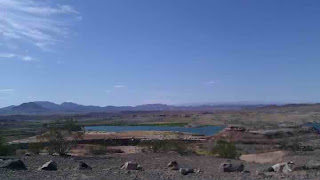 Here's my honey, enjoying the cruise:

I think that night we went to a different casino and had dinner. Buy one, get one free.  So we paid like $10 for dinner, plus tip, and it was a buffet.  :)

Monday, I think we went for lunch at the same casino from the night before and then went to the pool at our hotel.  Spent time reading a book, while DH enjoyed the pool.  Afterwards, we went hunting for a place our friend recommended for a cupcake.  LOL  It's called, "The Cupcakery".  Unfortunately, our friend sent us to the wrong place.  We had fun checking out some of the Vegas strip while looking for it though.
Here's a pic of the Venetian, where they have gondola rides.  It's a little blurry.  I took it from my phone. 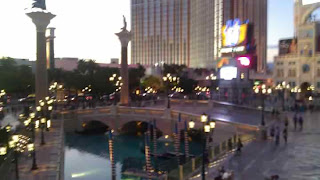 Finally, after hitting most of the Vegas strip, we found "The Cupcakery".  It was in the Monte Carlo and not in NY, NY.  I finally thought, hey why don't I just look online-duh! LOL 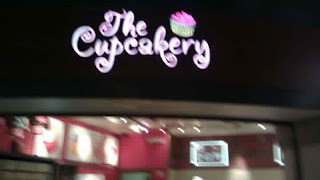 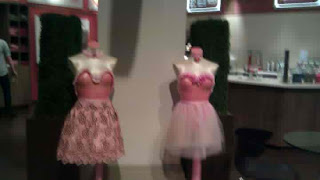 We also got Ben and Jerry's ice cream!  LOL  Actually, I didn't eat my cupcake until Wednesday afternoon at the airport.  I got Mocha frosting with chocolate cupcake.  The icing was so rich and sweet it hurt my teeth!  My friend said they opened one in The Woodlands too....hmmm, that's all I need!  LOL

We ended up going to In and Out Burgers that night for dinner.  :)
Afterwards we met up with a guy I went to highschool with.  He and his wife, daughter, and mom flew up on Sunday.  He and his wife now live in Saudi Arabia and were home in Houston for vacation.  They flew to Vegas for a few days and we went and saw them.  He told me about another gal we went to school with working in one of the casinos.  FUNNY, because it was the one we had eaten lunch that day and dinner the night before!  What's even funnier is, we ended up going there the next day, and almost ran smack dab into one another.

We got a chance to do a quick catchup, said our goodbyes and then we met some friends of my parents at our hotel after a quick trip to Walmart.  One of my dad's oldest friends and his wife.  I hadn't seen them since I was probably 12 or 13.  This was probably one of the highlights of the trip, because over the years they have become Holy Ghost filled Christians and we got to share the goodness of GOD for several hours.  They were so sweet to come meet us at our hotel and then we all went to the diner and had the $10.99 prime rib and they wanted to bless us for our anniversary by paying!

After they left, we headed towards Hoover Dam again, to see if it was lighted at night.  We ended up driving over the bridge, barely seeing the dam, and headed back to our hotel.

Wednesday our trip came to an end.  Got up and ready to turn the rental in.  Lost my earring, somewhere between the hotel and returning the car.  :(  Paid $150 to get an earlier flight.  It was a direct flight from Vegas to Houston....but wouldn't you know just before we are to land in Houston, Houston has severe thunderstorms, we have to divert to Austin, fuel up and wait for the storms to pass.  So we got in almost at the same time that we would have originally landed.  Hopefully we will get a refund.  We filed for one.

Now it's back to the grindstone.  :D    Not that I mind, great getting back and seeing my babies!

sounds like a nice get away for you guys. Can you still take tours down into the Hoover Dam. We did that years ago and it was sooo interesting.